Producer. Best of Edinburgh 2013. Claire Dowie’s Why is John Lennon Wearing a Skirt? Cinderella and The Soul Sisters.
magical rework of the classic tale set to all your favorite motown songs.
includes ‘Ain’t No Mountain High Enough
Love Train
Don’t Leave Me This Way.
Endless Love…
come and sing along and have some fun…
We are going to have a party…All NIght Long.... 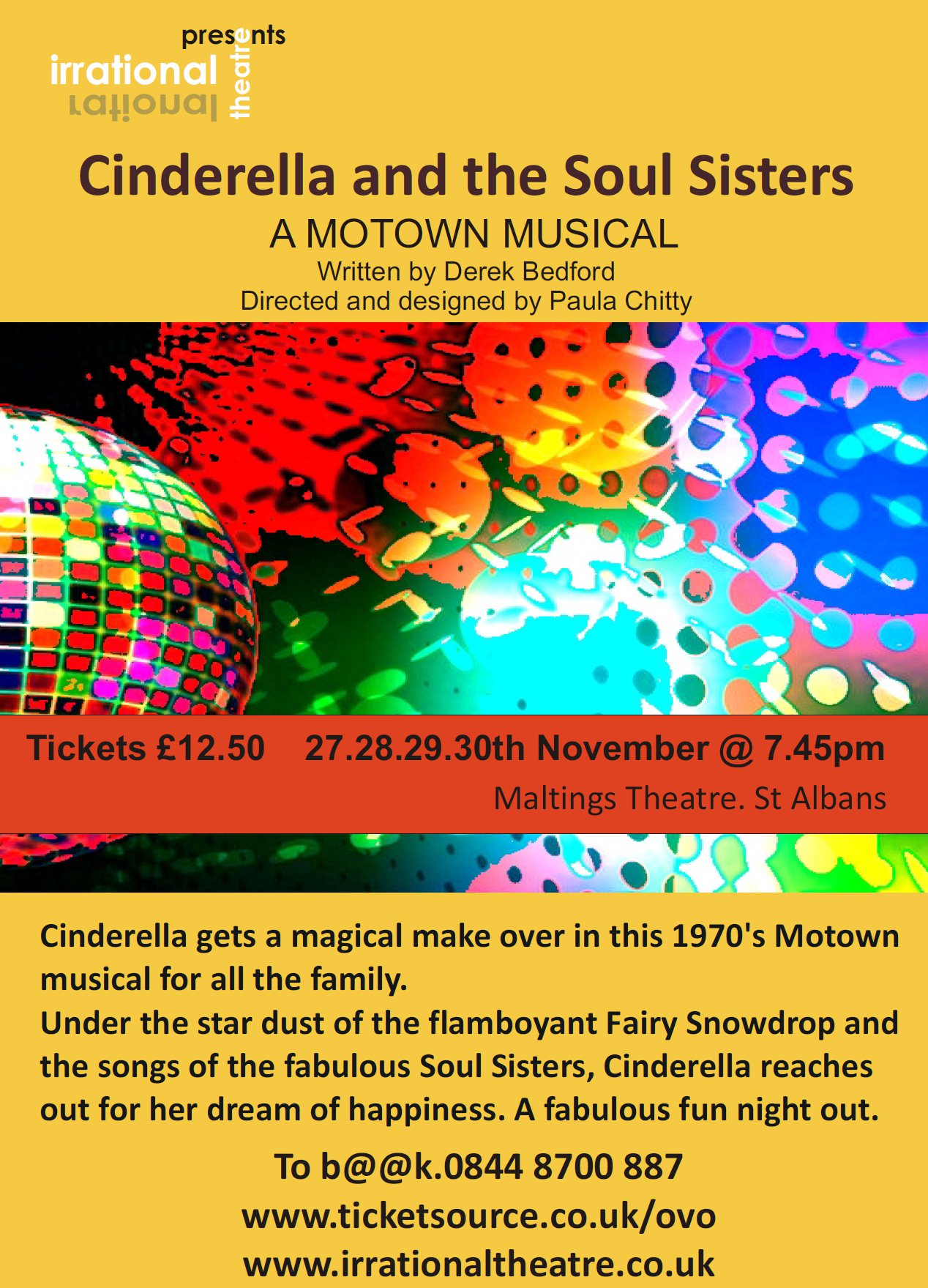 It's a wrap - sublime singing and performed with gusto

An evening of comedy.

A marriage is a fusion between opera and new writing 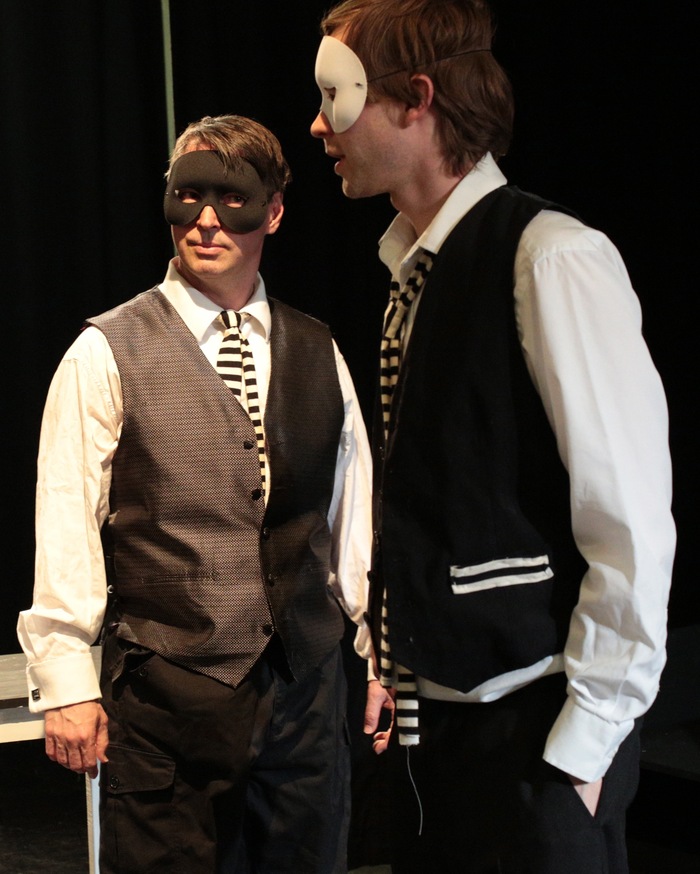 As you open the text of Alan Ayckbourne’s Improbable Fiction there lies a quote from Shakespeare’s Twelth Night..
[/read]

his search for unity must include his own chaotic home life, all under the shadow of his father’s now empty beloved beehive.
The story is very English. It’s set in the Humbles’ rural back garden, where the secrets and revelations of the two central, dysfunctional families are exposed in a public way.
This wry, witty and very funny portrait of middle-class England enables clear parallels to be drawn with the plot of Hamlet, especially noticeable in the relationship between Felix and his overbearing mother, Flora. [read more="Read more" less="Read less"] Joanna Norland takes a real life neighbourly dispute over ‘right of way’ as its inspiration. In Us by Steven Shawcroft two young men fail to consider the consequences as they embark on a crusade for financial vengeance. 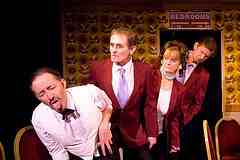 but this time there are two unhinged proprietors, two incompetent waiters and twice the mayhem.

A reworking of one of Shakespeare’s best loved and most hilarious comedies, and a great alternative to the Christmas panto

A second rate seventies hotel on the English Riviera – but this time there are two unhinged proprietors, two incompetent waiters and twice the mayhem.’ Thus reads the promotional blurb for OVO’s production of The Comedy of Errors. An Errors inspired by Fawlty Towers eh? What an excellent idea! Now, execution is everything, and this could have been one of those brilliant ideas that fail miserably. But I have to say that, on the whole, the cast and crew do a really good job, and this should be another successful show for OVO.

The play opens, rather bravely, with several minutes of silence, whilst we see Egeon and Emilia, with their twin babies, adopting two more twin boys, and becoming separated and shipwrecked. The action then moves on, and the comedy begins, with Egeon walking past with a suitcase – on which is a sign that says ‘23 years later’.

Set in Budleigh Salterton(!) rather than Ephesus, this production drops some of the smaller characters (they aren’t missed), and adds three singing hotel staff, (Chris Delaney, Vince McLoughlin, and Linda Bagaini), who act as a kind of bitchy Redcoat Greek Chorus, breaking into song when things get too confusing for the other characters on stage.

I’m getting to recognise the OVO regulars, and have seen Rob Ferguson in a couple of productions, but he’s never really made it onto my radar. So I was pleasantly surprised to see him channelling John Cleese as Antipholus of Syracuse, proving that he has a real talent for comic acting. With jiggling legs and fidgeting fingers, he gets more and more frustrated, and more violent towards poor Dromio/Manuel. He really is a joy to watch. His counterpart, Warren Albers, as Antipholus of Salterton, is rather more physically static, but gets himself worked up a treat, perspiring and almost spitting with rage at the confusion around him. This sharing-out of characteristics works with the Dromios too, with Mark Snelling as the more downtrodden Dromio of Syracuse, and Howard Salinger (always a good bet) as the cheekier Dromio of Salterton. Both do an excellent job.

Paul de Burton is on top form as Egeon, with his lengthy speeches at the start of the play. Lucy Crick as Adriana, and Jo Emery as Luciana play it totally straight amidst the madness, and are all the funnier for it. Musical Director James Pitchford makes a cameo appearance as the creepy Doctor Pinch – (I heard someone in the audience whisper ‘Mr Bean!’). And I have to commend the extremely versatile Kieran Cummins, who plays two very different roles: suited and bespectacled Solinus – serious and sympathetic; and goldsmith Angelo – in the tremendously camp style of a 1970s sitcom homosexual. The only cast member I was disappointed by was Linda Bagaini as the Abbess/Emilia. I know that Bagaini does well with comedic roles, but as serious Emilia she was just flat and emotionless.

Whilst the acting is – for the most part – sound, and the production enjoyable, I’d like to see the comedy – especially the physical comedy – pushed even further, and the serious moments – such at the reunion scene at the end – given rather more emotion. The play itself makes provision for more physical comedy, and the 70s sitcom-style depends upon it. Slaps and pratfalls need to be larger. And to contrast with this, the tender moments need to be extremely tender. The audience has laughed hard throughout, and it should be easy to make them a little weepy at the end, but I felt that the final scene was rather rushed and the opportunity wasted.

The set, with a backdrop of seventies wallpaper, is deliberately made to look shoddy and second rate, as though it has been repaired with sticky tape and odd bits of wood one time too many. What I didn’t like was the white wave-painted rim around the edge of the set. I understand that this exists to create a boundary between indoors and out, but I found it somewhat distracting to the eye. I would do away with this entirely. I was also unimpressed with the use of mime to establish doors and windows. Mime is one of those tricky things that everyone thinks they can do but few can actually do well. And this inconsistency in mime quality (some actors got it right, some messed it up, some forgot to mime a door at all), and sounds cues (the door slamming shut) was one of those small irritations that build throughout a show. I’m not sure how this issue could have been addressed with the current stage set-up, but there were times when some kind of physical barrier would have been better, especially in the scene where the two Dromios are either side of the door shouting at one another.

The actual styling of the play was very well executed, and played with the 1970s flavour throughout, from Antipholus’ necktie which matched the hotel wallpaper, to the Benny Hill chase across the stage. And for fans of Fawlty Towers there are some lovely in-jokes. All in all a wonderful homage to a classic show, and some really fun and very accessible Shakespeare. I love to see Shakespeare given a contemporary edge, and first time director Paula Chitty should be congratulated for achieving this. Although their shows may not be as polished as some larger professional productions, OVO retains a charm and originality that never fails to warm the audience and leave them wanting more. If you want an alternative to the traditional Christmas panto, then this production of Errors is for you.[/read] Designer - The Yeomen of the Guard – Gilbert and Sulivan.